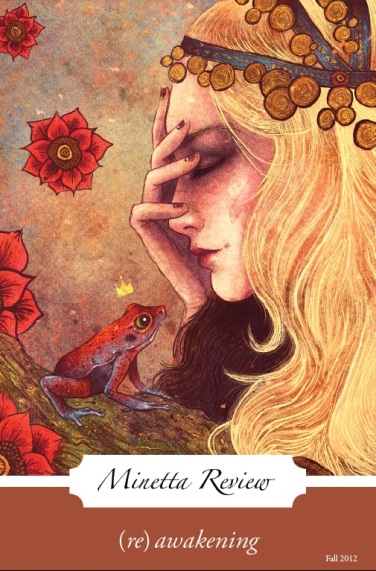 Flip through the Fall 2012 issue–begin by clicking the cover!

The Minetta Review’s Fall 2012 issue, (re)awakening, is accessible through the Issuu service. Click here to read!

Under the Fall 2012 editorial board, Minetta carried through with its most extensive marketing effort yet. Over the summer months and throughout the fall reading period, we reached out to writers and readers by way of: campus bulletins and mailing lists; distribution at bookshops in Greenwich Village; online calls for submissions on Winning Writers, Duotrope, Lambda Literary, UPenn, and Tumblr; content solicitations for literary criticism, NYU dramatic writing, NYU MFA studio art, and archival material; and renovation of the Minetta WordPress.

With respect to the inboxes of previous issues, the Fall 2012 issue was the most selective, with the editors reviewing more than triple the average number of submissions. Given the nature of the issue’s submissions and content solicitations, we produced the largest Minetta ever released: 128 pages, sent forth under the ambitious banner of (re)awakening.

The Fall 2012 Open Mic, presented by Minetta Review and Rubin Residence Hall’s Pria Shah, was more beautiful than I could have ever imagined. On November 29 at Rubin’s Blackbox Theater, over fifty people gathered to enjoy what became two hours of student performances. Check out the event pictures that Pria took, hear what one NYU student had to say about it, and stay tuned for Minetta’s Spring 2013 events.

On behalf of the editorial board and publication staff, I’d like to thank all who’ve submitted, everyone who takes the time to go through our selections, and those who’ve helped Minetta get around. I’m sincerely grateful for your readership, which brings so much meaning to the work we do.